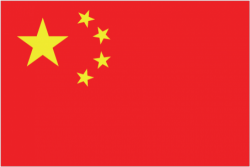 The flag of the People's Republic of China is a red field charged in the canton (upper corner nearest the flagpole) with five golden stars. The design features one large star, with four smaller stars in a semicircle set off towards the fly (the side farthest from the flag pole). The red represents the communist revolution; the five stars and their relationship represent the unity of the Chinese people under the leadership of the Communist Party of China (CPC). Sometimes, the flag is referred to as the "Five-star Red Flag"

The flag was designed by Zeng Liansong, a citizen from Rui'an, Zhejiang. He designed it in response to a circular distributed by the Preparatory Committee of the New Political Consultative Conference in July 1949, shortly after they came to power following the Chinese Civil War. 2,992 (or 3,012, see below) entries were received for the design competition, and Zeng's design was put into a pool of 38 finalists. After several meetings and slight modifications, Zeng's design was chosen as the national flag. The first flag was hoisted by the PLA on a pole overlooking Beijing's Tiananmen Square on October 1, 1949, at a ceremony announcing the founding of the People's Republic.