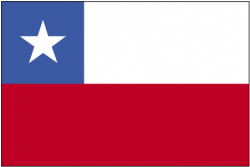 The national flag of Chile, consists of two unequal horizontal bands of white and red and a blue square the same height as the white band in the canton, which bears a white five-pointed star in the center. It was adopted on 18 October 1817. The Chilean flag is also known in Spanish as La Estrella Solitaria (The Lone Star).

The star represents a guide to progress and honor; blue symbolizes the sky and the Pacific Ocean, white is for the snow-covered Andes, and red stands for the blood spilled to achieve independence.

According to the epic poem La Araucana, the colors were derived from those from the flag flown by the Mapuche during the Arauco War. "Flag Day" is held each year on the ninth of July to commemorate the 77 soldiers who died in the 1882 Battle of La Concepción.