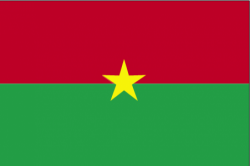 The flag of Burkina Faso is formed by two equal horizontal bands of red (top) and green, with a yellow five-pointed star resting in the center.

The flag was adopted on 4 August 1984. The flag is colored in the popular Pan-African colors of the Ethiopian flag, reflecting both a break with the country’s colonial past and its unity with other African ex-colonies. The red is also said to symbolize the revolution and the green the abundance of agricultural and natural riches. The yellow star placed over the red and green stripes is the guiding light of the revolution. The flag was adopted following the coup of 1983 which brought Thomas Sankara to power.