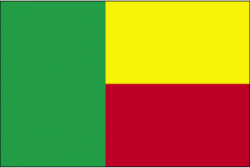 The National Flag of Benin is a flag consisting of two horizontal yellow and red bands on the fly side and a green vertical band at the hoist.

The colours of the flag carry cultural, political, and regional meanings. Nationally, the yellow and green allude to the northern savannas and palm groves located in the south of the country, while the red symbolizes the blood shed by those who fought for Dahomey. On a continental level, the yellow, green and red represented the Pan-Africanist movement; the three colours were utilized by the African Democratic Rally, a political party representing the interests of French West Africa in the National Assembly of France at the time of decolonization .Furthermore, the colours are the same as the ones utilized in the Flag of Ethiopia. This honours the oldest independent country in Africa and the only nation other than Liberia to remain independent during the Scramble for Africa.