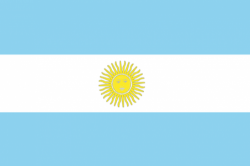 There are multiple interpretations on the reasons for those colors. The flag was created by Manuel Belgrano, in line with the recent creation of the Cockade of Argentina, and was first raised at the city of Rosario on February 27, 1812, during the Argentine War of Independence. The National Flag Memorial was later built on the site. The First Triumvirate did not approve the use of the flag, but the Asamblea del Año XIII allowed the use of the flag as a war flag. It was the Congress of Tucumán which finally designated it as the national flag, in 1816. In 1818, a yellow Sun of May was added to the center.

Popular belief attributes the colors to those of the sky, clouds and the sun; some anthems to the flag like "Aurora" or "Salute to the flag" state so as well. However, historians usually disregard such idea, and attribute them to loyalty towards the House of Bourbon.

From 1978, the flag's official proportions are 9:14, and its official size is 0.9 by 1.4 meters. It features three stripes alternating cerulean blue - white. Each stripe is 30 centimeters high. In the center stripe there is an emblem known as the Sun of May (Spanish: Sol de Mayo), a golden sun. The Sun is modeled after the symbol of Inti, the Incan god of the Sun. Flags with proportions of 1:2 and 2:3 are also in use.