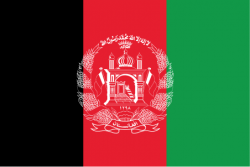 The flag of Afghanistan (Pashto: د افغانستان بيرغ, Persian: بيرق افغانستان) was adopted by the Afghan Interim Administration on December 22, 2001.

This flag is similar to the one flown in Afghanistan during the monarchy between 1930 and 1973. The difference is the addition of the shahadah at the top of the coat of arms (seen in yellow) in the center. This flag consists of three stripes of the colors black, red, and green. This has been present on most flags of Afghanistan in the last twenty years. The center emblem is the classical emblem of Afghanistan with a mosque with its mihrab facing Makah.

Afghanistan has had more changes of its national flag during the 20th century than any other country in the world. It has had 20 different flags since the first flag when the Hotaki dynasty was established in 1709 that made Afghanistan independent.