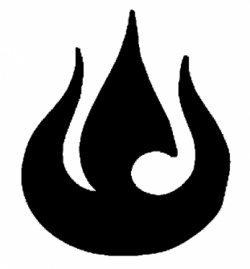 The Fire Nation consists of an archipelago of volcanic islands that increase in size as one travels from east to west. The capital city is located on the eastern shoreline of the largest (furthest west) of these islands and sits inside the mouth of a gigantic, dormant volcano. This nation is the home of the people who practice the art of Firebending, one of four methods of elemental manipulation in the series (for full details, see the symbol for ‘Firebending’). Like the Earth Kingdom, the culture of the Fire Nation was stylistically inspired by China, Japan and other Asian countries. The symbol of the fire nation is a stylized three-pronged flame with a distinctive “bite” on the right-hand side of its central peak.