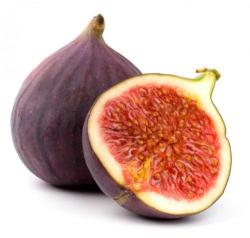 As one of the oldest cultivated fruits in the world, the fig is a potent symbol in many cultures.

Due to their plump shape, luscious texture and abundance of seeds, figs are strongly associated with fertility. They were an attribute of Venus (Aphrodite), the Greco-Roman goddess of love, as well as Bacchus (Dionysus), the god of wine, merriment and physical excess. It is also interesting to note that both male and female symbolism are covered under the fig’s umbrella. While its rounded shape specifically invokes female fertility and abundance, the sap of the fig tree has a milky consistency that likens it to semen, symbolizing male fertility and potency.

In Buddhism, a species of fig tree- now known as Ficus Religiosa but traditionally called the Bodhi Tree- is one of the most important symbols of the faith. It was beneath this tree that Siddhartha Gautama, the renunciant prince who became the Buddha, underwent an intense period of meditation and was able to achieve enlightenment. The Bodhi Tree was such an important symbol that in the earliest Buddhist artwork, there was a great reluctance- supposedly on his own wishes- to portray the Buddha as a human being; instead, various symbolic representations, of which this tree was prominent, were commonly used in those early centuries.

In the Bible’s Book of Genesis, Adam and Eve cover their nakedness with fig leaves after they have partaken of the forbidden fruit in the Garden of Eden (as famously illustrated in countless paintings and sculptures). In this context, the fig can be seen as a symbol of knowledge and intelligence; it wasn’t until after the forbidden fruit was consumed that Adam and Eve became aware of and ashamed of their nakedness, so the use of fig leaves as a covering is an indication of that knowledge.