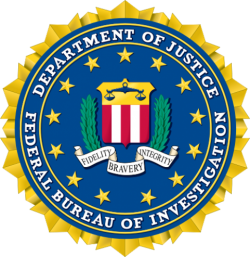 Over the years, the FBI seal has undergone several significant changes. In its early years, the Bureau used the Department of Justice seal. The first official FBI seal was adopted in 1935, modifying the Department of Justice logo by adding “Federal Bureau of Investigation” and “Fidelity, Bravery, and Integrity” to the outer band. In 1940, Special Agent Leo Gauthier—a draftsman, artist, and illustrator—presented a new design based on an earlier Bureau flag that he had created. This design was readily accepted and has been the Bureau’s symbol ever since.

Each symbol and color in the FBI seal has special significance. The dominant blue field of the seal and the scales on the shield represent justice. The endless circle of 13 stars denotes unity of purpose as exemplified by the original 13 states. The laurel leaf has, since early civilization, symbolized academic honors, distinction, and fame. There are exactly 46 leaves in the two branches, since there were 46 states in the Union when the FBI was founded in 1908. The significance of the red and white parallel stripes lies in their colors. Red traditionally stands for courage, valor, strength, while white conveys cleanliness, light, truth, and peace. As in the American flag, the red bars exceed the white by one. The motto, “ Fidelity, Bravery, Integrity,” succinctly describes the motivating force behind the men and women of the FBI (see below). The peaked bevelled edge which circumscribes the seal symbolizes the severe challenges confronting the FBI and the ruggedness of the organization. The gold color in the seal conveys its overall value.