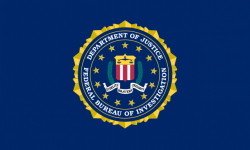 Flag of the U.S. Federal Bureau of Investigation.

The colors and symbol of the seal of the FBI represent the values and standards of the FBI and the United States and allude to the history of both the organization and the country. The center of the seal depicts a shield bracketed by two laurel branches, with an inscribed scroll below, set against a blue field. A gold-outlined strip occupies the circumference of the field, bearing the words "DEPARTMENT OF JUSTICE" and "FEDERAL BUREAU OF INVESTIGATION" below. A circle of thirteen golden stars surrounds the shield and laurels, representing unity of purpose and the original thirteen founding states of the United States. The laurel branches represent academic honors, distinction and fame. The two branches depict a total of 46 leaves, standing for the number of U.S. states when the FBI was founded in 1908.

The blue field behind the central shield represents justice, as do the stripes set on a golden field at the shield's top. Five parallel vertical red and white stripes make up the rest of the shield, echoing the colors of the Flag of the United States. As with the flag, there is one more red stripe than white. The stripes symbolize the values of the FBI; the red stripes stand for courage, valor, and strength, while the white ones represent light, cleanliness, and truth.