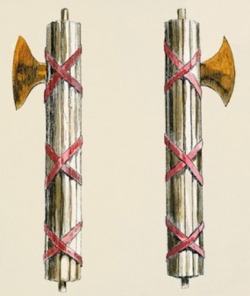 Comprising an axe wrapped in birch rods and secured with cord (a pair of which are depicted here), the fasces has a long and colorful history as a political symbol.

The fasces was originally a Roman symbol of power, justice, and authority. While the axe alone certainly embodies some of these traits, the symbolism was reinforced by the fact that birch rods were a preferred tool of punishment and discipline, a trend that was widespread until relatively recently.

In the 1930’s, Benito Mussolini adopted the fasces as the symbol of the Italian Fascist Party. Indeed, the word “fascism” is likely derived from this ancient symbol.