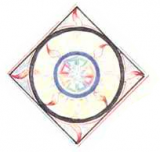 Heraldic device of Fëanor, a character from J.R.R. Tolkien’s Middle-Earth.

Known primarily as the author of The Hobbit, The Lord of the Rings, and The Silmarillion, John Ronald Reuel Tolkien also created a number of original illustrations for his works. Among these illustrations were heraldic devices for several of his characters. This device belongs to Fëanor, an Elf of the Noldor clan and one of the greatest Elves who ever lived.

According to the website Tolkien Gateway, these images appeared on calendars and book jackets in the 1970's, shortly after the author's death. Although the full symbolism behind many of them is unknown, certain details can be speculated upon: In Fëanor's case, his device resembles the winged sun disk of his father Finwë, the first High King of the Noldor. It could also be a reference to Fëanor's birth name Fëanáro, meaning "Spirit of Fire".

The eldest son of Finwë, Fëanor invented the first written script for the Elves, known as Tengwar, and was famed for his skills as an artisan and craftsman. He was also the catalyst for many major events that took place in the First Age of Middle-Earth.