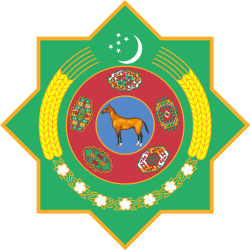 The eight-point green star burst (known as the Rub El Hizb (۞), a symbol of Islam, to which a majority of Turkmen profess) with golden edges features in its center a red circular disc which carries sheaves of wheat, five carpet guls, and centered upon that a smaller blue circle with a lifelike (rather than heralded) depiction of an Akhal-Teke horse, a source of pride for the Turkmen people. A round variant of the emblem was used from 1992 until 2003