Emblem of the Knights of Columbus 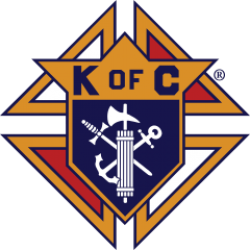 The Knights of Columbus is the world's largest Catholic fraternal service organization. Founded by Father Michael J. McGivney in New Haven, Connecticut, in 1882, it was named in honor of the mariner Christopher Columbus. Originally serving as a mutual benefit society to working class and immigrant Catholics in the United States, it developed into a fraternal benefit society dedicated to providing charitable services, promoting Catholic education and Catholic public policy positions, and actively defending Catholicism in various nations.

The emblem of the Order was designed by Past Supreme Knight James T. Mullen and adopted at the second Supreme Council meeting on May 12, 1883. Shields used by medieval knights served as the inspiration, and the emblem consists of a shield mounted on a Formée cross, which is an artistic representation of the cross of Christ. This represents the Catholic identity of the Order.

Mounted on the shield are three objects: a fasces; an anchor; and a dagger. In ancient Rome, the fasces was carried before magistrates as an emblem of authority. The Order uses it as "symbolic of authority which must exist in any tightly-bonded and efficiently operating organization". The anchor represents Christopher Columbus, patron of the Order. The short sword, or dagger, was a weapon used by medieval knights. The shield as a whole, with the letters "K of C", represents "Catholic Knighthood in organized merciful action".