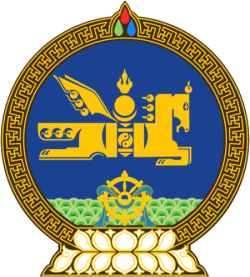 The state emblem was adopted on March 25, 1992, following the fall of the Communist government. The details of it are laid out in Chapter 1, Article 12(2) of the Constitution of Mongolia.

The outer rim features a tumen nasan, symbolizing eternity, surrounding a circular blue field, symbolizing the sky. On the center of the field is a combination of the Soyombo symbol and the wind horse (treasured steed), symbolizing Mongolia's independence, sovereignty, and spirit. Sun, moon and fire symbols derived from Xiongnu.Above the field is a Cintamani (Чандмань), representing the Buddhist Three Jewels, which in Mongolian folklore grants wishes. Below the central emblem is a green mountain range, with the Wheel of Dharma (Хүрд) at the center. On the bottom of the mountain range and wheel is a khadag (Хадаг), a ceremonial scarf.