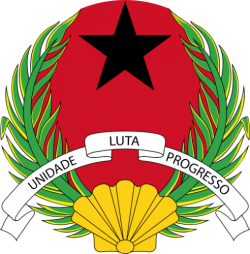 The national emblem of Guinea-Bissau was adopted shortly after independence from Portugal in 1973. Featured prominently is a black star, that is part of traditional Pan-African symbolism, and is often referred to as the Black star of Africa. A seashell at the bottom unites two symmetrical olive branches. The sea shell is symbolism for the location of the country on the West coast of Africa. The red banner contains the national motto of the nation: that translates to English as "Unity, Struggle, Progress".