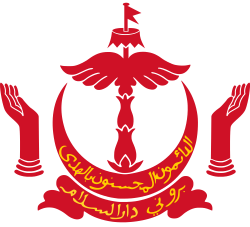 The national emblem of Brunei is featured prominently on the flag of Brunei. It was adopted in 1940.

There are five main components to the national emblem, according to the government's official website. They are the flag, the royal umbrella, the wing, the hands, and the crescent. On the crescent is writing in Arabic script that contain the national motto of: Always in service with God's guidance. Below this is a banner with the name of the nation in Arabic script as Brunei Darussalam or Brunei, the Abode of Peace.

The Flag and Payung Ubor-Ubor (in which the latter is featured below the Flag) have been the royal insignia since the creation of the emblem. The wings symbolize protection of justice, tranquility, prosperity and peace. Below these is the crescent that is the symbol of Islam, the national religion of Brunei. The hands symbolize the government's duty to preserve and promotes the welfare of the citizens and to protect the people.