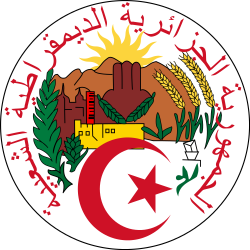 The national emblem of Algeria (Arabic: شعار الجزائر الوطني‎) is the seal used by the government, as other states use coats of arms.

The current form of the emblem was adopted in 1976, but was only differentiated from previous one by the changing of the motto from French to Arabic. Contained on the emblem is the crescent that is also found on the flag of Algeria, and is a symbol of Islam. The text that rings the emblem says in Arabic: الجمهورية الجزائرية الديمقراطية الشعبية ("The People's Democratic Republic of Algeria", the country's official name).

The hand of Fatima, a traditional symbol of the region, appears in front of the Atlas Mountains, below a rising sun representing a new era. Buildings stand for industry and plants for agriculture.