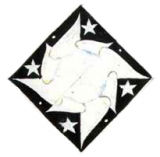 Heraldic device of Elwë, a character from J.R.R. Tolkien’s Middle-Earth.

Known primarily as the author of The Hobbit, The Lord of the Rings, and The Silmarillion, John Ronald Reuel Tolkien also created a number of original illustrations for his works. Among these illustrations were heraldic devices for several of his characters. This device belongs to Elwë, an Elf of the Teleri clan and a major player in the wars and conflicts of the First Age of Middle-Earth.

According to the website Tolkien Gateway, these images appeared on calendars and book jackets in the 1970's, shortly after the author's death. Although the full symbolism behind many of them is unknown, certain details can be speculated upon: Elwë's device appears to contain a winged lunar disk surrounded by stars.

Elwë’s people, the Teleri, were unique among the three early Elvish clans (the other two being the Vanyar and the Noldor), as over the centuries they split into many distinctive tribes, each with their own names, customs, and homelands. The Elves ruled directly by Elwë became known as the Sindar, or Grey Elves, and Elwë later became known as Thingol.