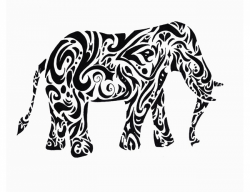 As one of the animal kingdom's largest and most powerful members, the elephant carries important symbolism in many cultures.

Aside from their intimidating physicality, elephants are highly intelligent creatures with a well-developed social structure. Among African elephants, the herd is typically led by an older female, or matriarch, and they are known to pass down knowledge of migration paths from generation to generation. Adult elephants will fiercely protect their young from danger, even against highly capable predators such as lions. It’s no surprise then, that such a remarkable animal has attracted a wealth of symbolic meaning over the millennia.

DISCLAIMER: THIS LISTING OF SPECIFIC CULTURAL EXAMPLES IS LIMITED AND SELECTIVE

Artistic depictions of elephants - such as rock paintings - have been found dating back thousands of years, clearly indicating their importance to early peoples. Although the elephant's numbers and habitat have been reduced and restricted over the past century, they retain a prominent role in stories and folktales throughout the African continent. In many of these tales, the close relationship between elephants and humans is emphasized by the fact that members of each species can take on the form of the other. Stories from Chad, Kenya, and the Zulu region of southern Africa all talk about how, under certain circumstances, elephants have become humans, humans have become elephants, and elephant children have been born from both parties. In Tanzania, there is a story about how the elephant was once a human being but got swindled out of all of his limbs except one, which became his trunk. The Ashanti people of Ghana held elephants in such high regard that when they found one dead in the wild, they honored it with a funeral fit for one of their tribe’s own chiefs.

Indian elephants were used in battle for thousands of years, and from ancient times until the present day elephants were endowed with prominent religious symbolism. One of the earliest gods worshiped in the region was Indra. Associated with thunder, Indra’s mount was the sacred white elephant Airavata. The god Ganesh, son of Shiva and Parvati, is usually depicted with the head of an elephant. According to the Mahabharata, one of India’s greatest epic poems, Shiva accidently cut off the head of his son and, quickly looking around for a replacement, spotted an elephant and placed its head on his son’s shoulders. Since elephants can easily forage through tough terrain, Ganesh assumes this quality in a spiritual sense and is often titled the "remover of obstacles". The elephant also plays a symbolic role in Buddhism: Before Siddhartha Gautama, the Indian prince who would later become the Buddha, was born, his mother had a dream in which a white elephant announced the birth of her son.

To the ancient Greeks and Romans, elephants symbolized military strength and triumph. Alexander the Great encountered war elephants at the Battle of the Hydaspes River (located in modern-day Pakistan) in 326 BCE, and in later years coins were often issued that depicted Alexander and his various dynastic successors wearing the scalp of an elephant as a crown or headdress. Hannibal, the legendary general from Carthage (roughly equivalent to modern-day Tunis, the capital of Tunisia) used elephants on his famous march across the Alps to invade the Roman Empire. In Alexandria, Egypt and later in Rome, elephants were displayed in marches, processions, and triumphal parades.

During the Middle Ages, the elephant appeared in bestiaries (books detailing animals and their various important attributes and associations) as symbols of innocence, purity, and chastity. The reasoning behind this symbolism supposedly dates back to the Ancient Greek philosopher Aristotle, whose works began to permeate Medieval Europe through European contact with Islamic scribes and translators. According to Aristotle, a bull (male) elephant did not engage in sexual intercourse while his mate was pregnant, and with the high emphasis placed on faithfulness and virginity in Medieval Europe, perhaps it’s not surprising that such associations made the elephant a positive symbol.