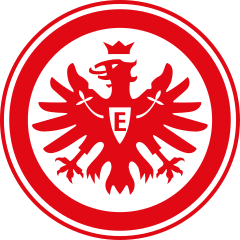 Eintracht Frankfurt e.V. is a German professional sports club based in Frankfurt, Hesse, that is best known for its football club, currently playing in the Bundesliga, the top tier of the German football league system. The club was founded in 1899 and have won one German championship, five DFB-Pokals, one UEFA Cup and once finished as runner-up in the European Cup. The team was one of the founding members of the Bundesliga at its inception and has spent a total of 51 seasons in the top division, thus making them the seventh longest participating club in the highest tier of the league.