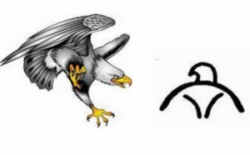 The meaning of the Eagle symbol was to signify courage, wisdom and strength and its purpose was as the messenger to the Creator.

The eagle was believed to carry prayers to the Great Spirit, Wakan Tanka, in the Spirit World and also had a special connection with visions. Eagle feathers were highly significant to the Native American Indians and the bones of eagles were used to make the whistles and flutes used at religious ceremonies and rituals. It was a custom to hold an eagle feather aloft when saying a prayer and during special council meetings eagle feathers were held as an assurance that the person was telling the truth. Eagle feathers also held a connection to the Great spirit. The eagle had the ability to live in the realm of spirit, and yet remain connected and balanced within the realm of Earth. The eagle is therefore often connected with balance. Eagle Myth: The Abenaki solar deity ‘Kisosen’ meaning “Sun-Bringer” was symbolized as an eagle whose wings opened to create the day and whose wings closed to create the night. In Native American mythology, an eagle called Wanblee Galeshka (spotted eagle) was a messenger for the Great Spirit and rescued a girl from the great flood in the world. He took her to the Black Hills (hence why that land is so sacred) and they believe they are all descended from this girl. For additional information refer to Power Animals.