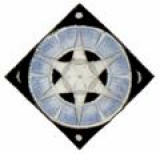 Heraldic device of Eärendil, a character from J.R.R. Tolkien’s Middle-Earth.

Known primarily as the author of The Hobbit, The Lord of the Rings, and The Silmarillion, John Ronald Reuel Tolkien also created a number of original illustrations for his works. Among these illustrations were heraldic devices for several of his characters. This device belongs to Eärendil, a key character in The Silmarillion and one of the most intriguing in all of Tolkien’s works.

Descended from both immortal Elves and mortal Men, Eärendil was a famous mariner and the first human to set foot in Valinor, land of the angelic beings known as the Valar. Because of his unique ancestry, the Valar granted Eärendil the gift of choosing his own race; Eärendil chose to be an Elf, and his ship was filled with shining flames and placed into the sky, where it became the Evening Star.

According to the website Tolkien Gateway, these images appeared on calendars and book jackets in the 1970's, shortly after the author's death. Although the full symbolism behind many of them is unknown, certain details can be speculated upon: In Eärendil's case, the star-like motif on his device seems fairly self-explanatory.