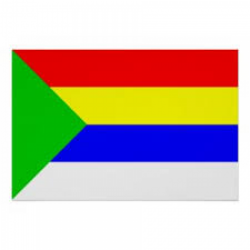 This flag represents the approximately one million people who are followers of Druze, a rich yet secretive religion centered primarily in Syria and Lebanon, as well as parts of Jordan and Israel.

One of the earliest champions of Druze was Muhammad bin Ismail Nashtakin ad-Darazi. In 11th century Egypt, he was a preacher of “Ismailism” (a philosophical offshoot of Shia Islam) who was later executed by the ruling Fatimid Caliphate. Although his teachings formed the basis of what would become the mainstream Druze faith, Druze is also notable for incorporating beliefs and principles from all three major monotheistic religions (Judaism, Christianity and Islam), as well as aspects of Ancient Greek philosophy and other systems.

There are a number of significant facets that set Druze apart from many of the belief systems that influenced its creation. In addition to lacking any major rites, rituals or ceremonies, the faith itself is closed to converts in both directions (no one can convert to Druze or away from it) and the full content of Druze sacred texts is only know to select members of the faith. While outside accounts of Druze culture exist, for the most part they are a secretive and tight-knit spiritual community.

Although variations of this flag do exist, the one constant of the design are the five specific colors. Each color has a number of symbolic meanings associated with them, and the same associations apply to the Druze Star, the other major symbol of the faith: