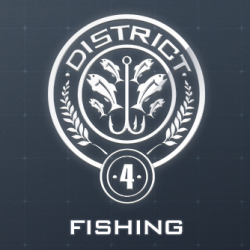 The seal of District 4 from The Hunger Games.

Each district of Panem has its own unique culture, as well as a specialized industry that creates products for the nation. District 4 is the fishing district, providing all manner of seafood and other maritime products. After Collins’ novels were adapted into a series of four feature films, the subsequent tie-in media created an official seal for each district that represented their industry. The seal of District 4 depicts a three-pronged fishhook surrounded by a school of six fish.