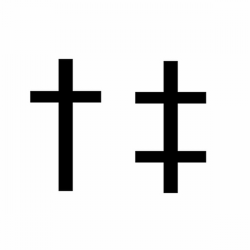 A dagger, or obelisk, U+2020 † dagger (HTML: † †), is a typographical symbol or glyph. The term "obelisk" derives from Greek ὀβελίσκος (obeliskos), which means "little obelus"; from Ancient Greek: ὀβελός (obelos) meaning "roasting spit". It was originally represented by the ÷ symbol and was first used by the Ancient Greek scholars as critical marks in manuscripts.

The dagger symbol originated from a variant of the obelus (plural: obeli), originally depicted by a plain line (-) or a line with one or two dots (÷). It represented an iron roasting spit, a dart, or the sharp end of a javelin, symbolizing the skewering or cutting out of dubious matter.

The obelus is believed to have been invented by the Homeric scholar Zenodotus as one of a system of editorial symbols. They were used to mark questionable or corrupt words or passages in manuscripts of the Homeric epics. The system was further refined by his student Aristophanes of Byzantium, who first introduced the asterisk and used a symbol resembling a ⊤ for an obelus; and finally by Aristophanes' student, in turn, Aristarchus, from whom they earned the name of 'Aristarchian symbols'.

While the asterisk (asteriscus) was used for corrective additions, the obelus was used for corrective deletions of invalid reconstructions. It was used when non-attested words are reconstructed for the sake of argument only, implying that the author did not believe such a word or word form had ever existed. Some scholars used the obelus and various other critical symbols, in conjunction with a second symbol known as the metobelos ("end of obelus"), variously represented as two vertically arranged dots, a γ-like symbol, a mallet-like symbol, or a diagonal slash (with or without one or two dots). They were used to indicate the end of a marked passage.