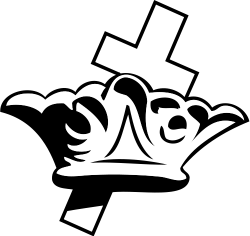 The Cross and Crown (a cross passing through a crown), is seen by some to be a Christian symbol appearing in many churches, particularly Roman Catholic; and has also been used in heraldry.

It is often interpreted as symbolizing the reward in heaven (the crown) coming after the trials in this life (the cross) (James 1:12).

In addition to Roman Catholic and orthodox Christianity uses, the symbol also appears in the seal of the Church of Christ, Scientist, where it is surrounded by the words "Heal the Sick, Cleanse the Lepers, Raise the Dead, Cast Out Demons", from the Gospel of Matthew, 10:8. In this symbol the crown stands for victory over death.

The symbol is also associated with Freemasonry, specifically the Knight Templar degree of the York Rite of Freemasonry.