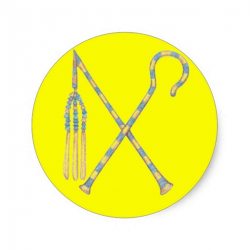 Individually, these objects each carry noteworthy meaning, but together they are a millennia-old symbol of power and authority.

Possibly originating from agricultural tools, the pairing of the crook and flail was commonly used in Ancient Egypt to represent the royal might of the pharaohs. Many artistic depictions show one object clasped in each of the subject's hands with the arms crossed over the chest.

The crook and flail are also commonly seen in depictions of Osiris, god of the underworld, as well as other Egyptian deities, further reinforcing their association with might and power.