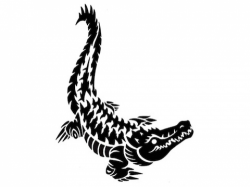 The crocodile is one of nature’s premier predators; at home on land and in the water, crocodiles can remain motionless for hours while targeting prey, and their bite strength can reach over 3000 pounds of force per square inch. For these and other reasons, crocodiles have acquired a great deal of symbolism over the millennia.

The ancient Egyptians assigned great symbolic importance to the crocodile. Not only were the creatures revered in their own right, but the god Sobek (also spelled Sebek) was depicted with the head of a crocodile. Due to the watery habitat in which the Egyptians encountered crocodiles, Sobek was strongly associated with the River Nile, and therefore the lifeblood of Egyptian civilization. In the Book of the Dead, a famous Egyptian text, a creature known as Ammit was also depicted with the head of a crocodile. Known as the devourer of the dead, if any person was deemed too sinful or unworthy to enter the afterlife, their heart was feed to Ammit.

Cultures from other parts of Africa, as well as the Indo-Pacific region, also assigned crocodiles important symbolism: the Venda people of modern-day South Africa valued the fierceness of the crocodile and considered it an appropriate symbol for their chiefs; due to its extremely fast and precise attacks when taking down prey, the Chinese and Cambodians associated crocodiles with lightning; and certain groups of Australian Aborigines consider the crocodile a wise ancestor figure, as well as the one who brought fire to the human race.

Crocodiles also have a significant association with trickery and deceit. The well-known expression “crocodile tears” essentially refers to a farce; crying not out of sadness but for the sake of appearances and/or to achieve a desire. In Medieval Europe, bestiaries (books that detailed the lives and behaviors of various animals) claimed that crocodiles used such tactics to lure their prey within striking distance, but this phenomenon may be due to something else entirely; when crocodiles are stalking prey from the water, their eyes are typically the only part of their bodies that remain visible above the surface. As they raise and lower themselves beneath the surface, water would naturally come from their eyes, giving the impression of tears.