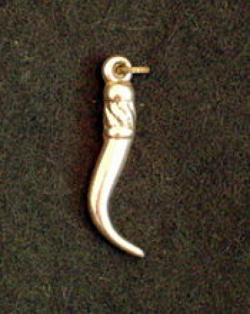 A cornicello or cornetto, Italian for "little horn" or "hornlet", is an amulet worn to protect against the evil eye. In the Southern Italian Dialects, it is called cuornuciello or variants thereof.

The Cornicello is an Italian amulet of good luck used to protect the wearer from the evil-eye curse. It is a twisted horn-shaped charm often made of gold, silver, bone, or red coral. Originally cornicelli resembled the twisted horn of an African eland, though over the years they have become stylized and less horn-like. A regionally popular amulet, they are primarily found in Italy and in America among descendents of Italian immigrants. According to some Calabrese traditions, the horn was once modeled after a chili pepper, due to its abundance in the region.