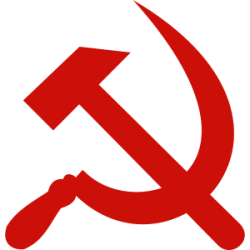 Meaning of the Communism hammer and sickle (☭)

The hammer and sickle (☭) or sickle and hammer (Russian: серп и мо́лот, translit. syerp i molot) is a communist symbol that was adopted during the Russian Revolution. At the time of creation, the hammer stood for industrial laborers and the sickle for the peasantry—combined they stood for the worker-peasant alliance for socialism.

After World War I (from which Russia withdrew in the year 1917) and the Russian Civil War, the hammer and sickle became more widely used as a symbol for peaceful labor within the Soviet Union and for international proletarian unity. It was taken up by many communist movements around the world, some with local variations. Today, even after the dissolution of the Soviet Union, the hammer and sickle remains commonplace in Russia and other former union republics, but its display is prohibited in some other former Communist countries as well as in countries where Communism is banned by law.

The display of the hammer and sickle symbol is banned in Indonesia as it is known to be the symbol of communism which is a banned ideology in Indonesia following the 1965‒1966 killings of communists. Anybody displaying such communist symbols will be arrested by authorities, or in worse cases usually confronted by the public.