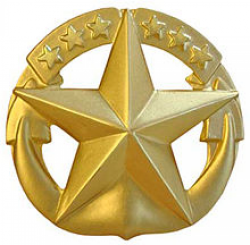 The Command at Sea insignia is a military badge of the United States Navy, designating senior officers below that of a flag rank, specifically, Captain and below, who are in command of, or have previously commanded, either a ship, submarine, an operational/deploy-able fleet air unit in naval aviation, or a special warfare (SEAL) unit.

It is worn centered over the right pocket while the wearer is holding an active command at sea billet as an incumbent, and is worn centered on the upper portion of the left pocket flap, under the warfare insignia and ribbons, after successful completion of the command tour, i.e., post-tour. Commanding officers who are detached for cause do not rate this privilege. A similar badge that is worn in the same manner as the Command at Sea pin is the Command Ashore insignia.