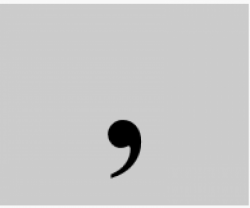 The comma (,) is a punctuation mark, and it appears in several variants in various languages

It has the same shape as an apostrophe or single closing quotation mark in many typefaces, but it differs from them in being placed on the baseline of the text. Some typefaces render it as a small line, slightly curved or straight but inclined from the vertical, or with the appearance of a small, filled-in number 9. It is used to separate parts of a sentence such as clauses and lists of three or more things.

The comma is used in many contexts and languages, mainly for separating things. According to the Oxford English Dictionary, the word comma comes directly from the Greek komma (κόμμα), which means something cut off or a short clause. A comma can also be used as a diacritic when combined with other characters.