Coat of arms of Luxembourg 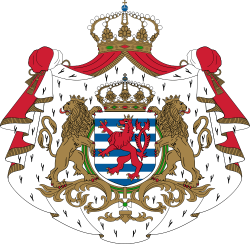 The coat of arms of Luxembourg has its origins in the Middle Ages, and was derived from that of the Duchy of Limburg, in modern day Belgium and the Netherlands. In heraldic language, these arms are described as: burely of 10 argent and azure, a lion rampant queue fourché in saltire gules armed, langued and crowned or.