Coat of arms of Liberia 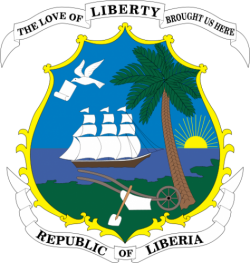 The coat of arms of Liberia consists of a shield containing a picture of 19th century ship arriving in Liberia. The ship symbolizes the ships which brought the freed slaves from the United States to Liberia. Above the shield the national motto of Liberia appears on a scroll: The love of liberty brought us here, and below the shield another scroll contains the official name of the country, Republic of Liberia.

The plow and the shovel represent the dignity of labor and hard work through which the nation will prosper. The rising sun in the background represents the birth of a nation. The palm tree, the nation's most versatile source of food, represents prosperity.

The white dove with a scroll represents the breath of peace.