Coat of arms of Jamaica 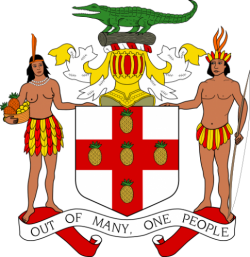 Considered as a legacy from the British with slight modifications, the Jamaican Coat of Arms was granted to Jamaica in 1661 under Royal Warrant. The original was designed by William Sancroft, then Archbishop of Canterbury.

The motto of the seal has been a matter of discussion for years since inception. The original motto, INDVS VTERQVE SERVIET VNI is the Latin translation for "The two Indians will serve as one", or rather "Both Indies will serve Together", in reference to the collective servitude of the Taino and Arawak Indians to the colonizers. The motto was replaced in 1962 with the English motto "Out of Many, One People", as tribute to the unity of the different cultural minorities inhabiting the nation. Perhaps as coincidence, the motto has the same meaning as the motto of the United States; E Pluribus Unum.