Coat of arms of Ivory Coast 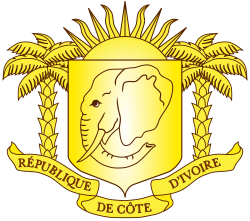 The coat of arms of Ivory Coast in its current form was adopted in 2001. The focal point of the emblem is the head of an elephant. The elephant is symbolically important to the nation since it is the largest animal found in Côte d'Ivoire as well as being the source of ivory for which the nation is named. The rising sun is a traditional symbol of a new beginning. Below the elephant head is a banner containing the name of the nation.