Coat of arms of Ireland 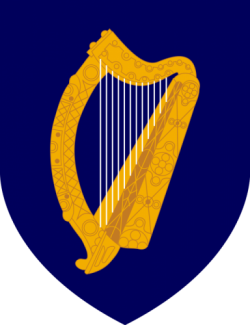 The coat of arms of Ireland is blazoned as Azure a harp Or, stringed Argent (a gold harp with silver strings on a blue background).

These arms have long been Ireland's heraldic emblem. References to them as being the arms of the king of Ireland can be found as early as the 13th century. These arms were adopted by Henry VIII of England when he ended the period of Lordship of Ireland and declared Ireland to be a kingdom again in 1541. When the crowns of England, Scotland and Ireland were united in 1706, they were integrated into the unified royal coat of arms of kingdoms of England, Scotland and Ireland. The harp was adopted as the emblem of the Irish Free State when it separated from the United Kingdom in 1922. They were registered as the arms of Ireland with the Chief Herald of Ireland on 9 November 1945.