Coat of arms of Gabon 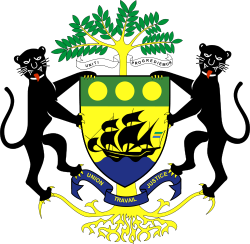 The coat of arms of Gabon was designed by the Swiss heraldist and vexillologist Louis Mühlemann, one of the founding members of the FIAV and also designer of the former coat of arms of Congo. It has been in use since 15 July 1963.

The coat of arms is unusual in having two ribbons with mottos in two different languages. The ribbon below the shield has a motto in French 'UNION, TRAVAIL, JUSTICE' ('Union, Work, Justice'). The second ribbon is placed beneath the branches of the okoumé tree and has a motto in Latin 'UNITI PROGREDIEMUR' ('We shall go forward united').