Coat of arms of Ecuador 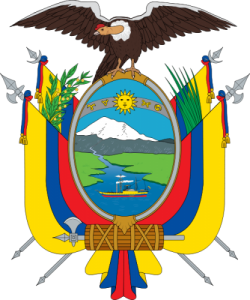 The coat of arms of Ecuador (Spanish: Escudo de armas del Ecuador) in its current form was established in 1900 based on an older version of 1845.

In the background of the oval shield is the mount Chimborazo, while the river originating from its base represents the Guayas. They both symbolize the beauty and wealth of the respective regions (Sierra or Costa). The ship on the river is named Guayas as well. In 1841 it was built in Guayaquil and was the first riverine steamship built on the South American west coast. Instead of a mast it features a Caduceus representing trade and economy. On top a golden sun surrounded by the astrological signs for Aries, Taurus, Gemini and Cancer representing the months March to July to symbolize the duration of the March Revolution of 1845.

The condor on top of the shield stretches his wings to symbolize power, greatness and strength of Ecuador. The shield is flanked by four flags of Ecuador. The laurel on the left represents the victories of the republic.The palm leaf on the right side is a symbol of the martyrs of the fight for independence and liberty. The Fasces below the shield represents the republican dignity.