Coat of arms of Botswana 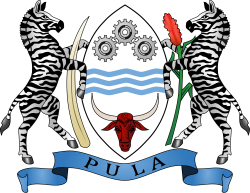 The coat of arms of Botswana was adopted on January 25, 1966. The center shield is supported by two zebras. The shape of the shield is that of traditional shields found in East Africa. On the top portion of the shield are three cogwheels that represent industry.

The three waves symbolize water, and reminds the viewer of the motto of the nation: pula, which means simply "rain", but also good luck, and is the name of the nation's currency. This motto also highlights the importance of water to Botswana. The motto is found at the bottom of the coat of arms on a blue banner.

At the bottom of the shield is the head of a bull, which symbolizes the importance of cattle herding to Botswana. The two zebras are present since zebras are an important part of Botswana's wildlife. The zebra on the right holds an ear of sorghum, an important crop in the nation. The zebra on the left holds a tusk of ivory, symbolic of the former ivory trade in Botswana.