Coat of arms of Benin 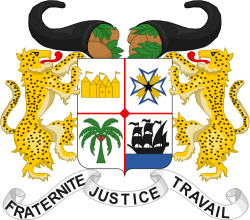 At the top of the emblem is the national crest that consists of two horns with corn in the ear and filled with sand. These are reputed to stand for prosperity. Below the crest is a shield that contains the actual coat of arms of Benin.

The shield is broken into four quadrants. The top left quadrant contains a castle in the style of the Somba, representative of the history of Benin. In the top right quadrant, is the Star of Benin, the highest award of the nation. Below this is a ship, that stands for the arrival of Europeans in Benin. In the lower left quadrant is a palm tree.

The shield is supported by a pair of leopards, the national animal of Benin. Below the shield is the motto of Benin (Fellowship, Justice, Work) in French.