Coat of arms of Barbados 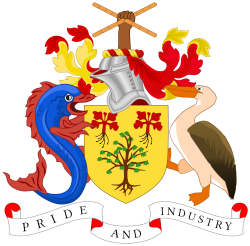 The coat of arms of Barbados was adopted on 14th February, 1966 by decree of Queen Elizabeth II. The Coat of Arms of Barbados was presented by the Queen to the President of the Senate, Sir Grey Massiah. Like other former British possessions in the Caribbean, the coat of arms has a helmet with a national symbol on top, and a shield beneath that is supported by two animals.

The Arms were designed by Mr. Neville Connell, for many years Curator of the Barbados Museum, with artistic assistance by Mrs. Hilda Ince.

The national symbol found on top of the helmet for Barbados is the fist of a Barbadian holding two stalks of sugar cane stalks that are crossed to resemble St. Andrew's Cross. This is representative of the importance of the sugar industry as well as Barbados celebrating its national independence day on St. Andrew's Day.

The shield is gold in color. Upon it are a pair of the national flower, known as the Pride of Barbados, and a single bearded fig tree (Ficus citrifolia). The shield is supported by a dolphin fish and pelican. They stand for the fishing industry and Pelican Island, respectively.

At the bottom is Barbados' national motto ("Pride and Industry") on a scroll.