Coat of arms of Australia 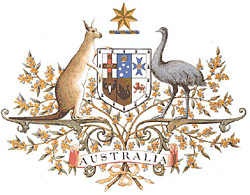 The coat of arms of Australia (formally known as Commonwealth Coat of Arms) is the official symbol of Australia. The initial coat of arms was granted by King Edward VII on 7 May 1908, and the current version was granted by King George V on 19 September 1912, although the 1908 version continued to be used in some contexts, notably appearing on the sixpenny coin until 1966.

The shield is the focal point of the coat of arms, contained within is the badge of each Australian state, the whole surrounded by an ermine border representing the federation of the states.