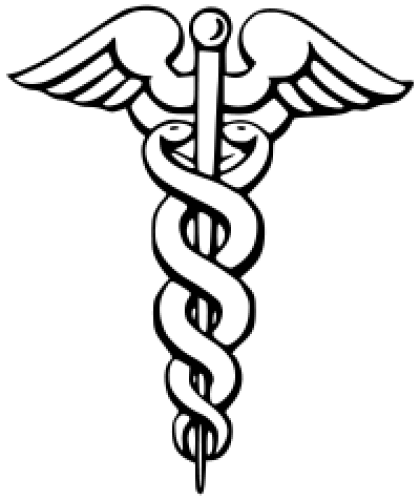 The same staff was also borne by heralds in general, for example by Iris, the messenger of Hera. It is a short staff entwined by two serpents, sometimes surmounted by wings. In Roman iconography it was often depicted being carried in the left hand of Mercury, the messenger of the gods, guide of the dead and protector of merchants, shepherds, gamblers, liars, and thieves.

As a symbolic object it represents Hermes (or the Roman Mercury), and by extension trades, occupations or undertakings associated with the god. In later Antiquity the caduceus provided the basis for the astrological symbol representing the planet Mercury. Thus, through its use in astrology and alchemy, it has come to denote the elemental metal of the same name.

By extension of its association with Mercury and Hermes, the caduceus is also a recognized symbol of commerce and negotiation, two realms in which balanced exchange and reciprocity are recognized as ideals. This association is ancient, and consistent from the Classical period to modern times. The caduceus is also used as a symbol representing printing, again by extension of the attributes of Mercury (in this case associated with writing and eloquence).

The caduceus is often mistakenly used as a symbol of medicine and medical practice (especially in North America), due to historical confusion with the traditional medical symbol, the rod of Asclepius. The Rod of Asclepius has only a single snake and no wings, so is similar in form to the caduceus with its two snakes and often with wings.