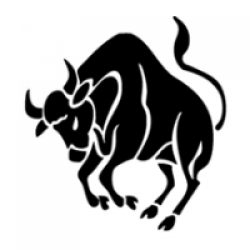 Powerful in all senses of the word, the bull has held symbolic importance for thousands of years across many different cultures.

In simplest terms, bulls are symbols of masculine power and virility. By extension, such associations can also include solar symbolism and the power of creation. In various religions, bulls are often associated with deities who embody these traits: the Greek Zeus; the Egyptian Apis, Min, and Ra; the Persian Mithras; and the Indian Shiva.

The bull has been a premium choice as a sacrificial animal in many cultures. Like other sacrificial animals, its organs were used for divination, and bull's blood was believed to impart the animal’s potency and power on whoever is touched by it. For example, when the Persian cult of Mithras became popular in the Roman Empire, one initiation ritual involved the initiate standing below a pierced grate in the floor while a bull was slaughtered directly above him, drenching him in the animal’s blood. Taking that symbolism further, the flesh of the bull was thought to be an aphrodisiac, and consuming it was believed to increase male potency.

The bull is also represented in the zodiac, as the sign of Taurus.