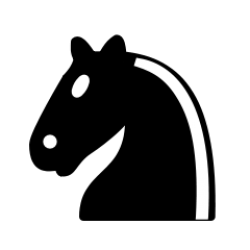 The knight (♘ ♞) is a piece in the game of chess, representing a knight (armored cavalry). It is normally represented by a horse's head and neck. Each player starts with two knights, which begin on the row closest to the player, one square from each corner.

The knight move is unusual among chess pieces. When it moves, it can move to a square that is two squares horizontally and one square vertically, or two squares vertically and one square horizontally. The complete move therefore looks like the letter L. Unlike all other standard chess pieces, the knight can 'jump over' all other pieces (of either color) to its destination square. It captures an enemy piece by replacing it on its square. The knight's ability to "jump over" other pieces means it tends to be at its most powerful in closed positions, in contrast to that of a bishop. The move is one of the longest-surviving moves in chess, having remained unchanged since before the seventh century. Because of this it also appears in most chess-related regional games. The knight moves alternately to light and dark squares.

A knight should always be close to where the action is, meaning it is best used on areas of the board where the opponent's pieces are clustered or close together. Pieces are generally more powerful if placed near the center of the board, but this is particularly true for a knight. A knight on the edge of the board attacks only three or four squares (depending on its exact location) and a knight in the corner only two. Moreover, it takes more moves for an uncentralized knight to switch operation to the opposite side of the board than an uncentralized bishop, rook, or queen. The mnemonic phrases "A knight on the rim is grim" or "A knight on the rim is dim" are often used in chess instruction to reflect this principle.