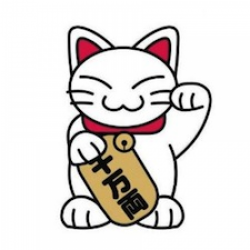 The famous image of the Maneki Neko or “beckoning cat” is an easily recognizable symbol of Chinese and Japanese culture.

This rather endearing character can appear in any number of different forms; colors can vary from one style to another, and one or both paws can be raised in any example. Regardless of aesthetics, the overriding purpose of the neko is to bring good luck, a theme common in both China and Japan. As such, images or statues depicting the neko are often seen in homes and any number of places of business, including offices and restaurants.

The neko also has an interesting story behind its appearance and symbolism. According to tradition, a group of samurai was passing by an impoverished Buddhist temple when a cat appeared with one paw raised up, as if to invite the warriors inside. After they had entered the temple, a heavy storm broke out, but luckily they remained sheltered thanks to the cat. Afterwards the condition of the temple began to improve, and the cat with the raised paw took on its status as a lucky image.