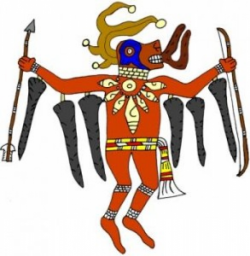 The Avanyu symbol is one of the many snake-like deities that figure in the mythology of some Native American tribes, notably the Pueblo.

The Avanyu symbol represented a benevolent but fearful creature. The meaning of the Avanyu symbol is the storm bringer and connected with lightning, thunderstorms and the guardian of water. The Avanyu was also revered as the changer of seasons and the bringer of sudden and sometimes violent change. The symbol of the Avanyu deity is represented by a horned serpent. The zigzag and meandering curves of the serpent or snake are suggestive of flowing water or the zig-zag of lightning. In some tribes Avanyu is believed to be a companion to the Kokopelli. Spiral symbols mimic the coiled serpent, like the Avanyu, representing the underlying mystery that people have felt towards the snake and the serpent and their place in mythology. Antlers and horns signified spiritual power, especially when applied to animals that did not ordinarily have them such as birds and snakes (serpents).

Native American Indians of the Mississippian culture were sun worshipers and had a highly complex warfare culture. Their symbols, such as the Avanyu symbol, reflect the warfare culture and the religious beliefs and cosmologies of the different historic tribes who existed at the time of the first European contact.

The Mississippians believed that the universe consisted of three parts with good and bad spiritual forces. These three worlds were linked together and their connection was usually portrayed as a cedar tree or a striped pole. The Underworld was inhabited by spirit snakes, the Upper world was inhabited by spirit birds and the people of the earth who were ruled by these powerful spirits like the Avanyu.

Items displaying symbols, like the Avanyu symbol, from the Mississippian culture have been found in burial sites that contained war axes, knives and other weapons. This type of symbol was embossed in valuable materials such as rare shells, copper and lead and depicted on pottery and stone tools and weapons.