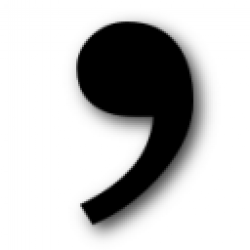 The apostrophe ( ’ although often rendered as ' ) is a punctuation mark, and sometimes a diacritic mark, in languages that use the Latin alphabet or certain other alphabets.

In English, it serves three purposes:

* The marking of the omission of one or more letters (as in the contraction of do not to don’t).

The marking of possessive case (as in the cat’s whiskers).

* The marking by some as plural of written items that are not words established in English orthography (as in P's and Q's). (This is considered incorrect by others; see Use in forming certain plurals. The use of the apostrophe to form plurals of proper words, as in apple’s, banana’s, etc., is universally considered incorrect.)

* According to the Oxford English Dictionary (OED), ‘apostrophe’ comes ultimately from Greek ἡ ἀπόστροφος [προσῳδία] (hē apóstrophos [prosōidía], “[the accent of] ‘turning away’, or elision”), through Latin and French.

The apostrophe looks the same as a closing single quotation mark, although they have different meanings. The apostrophe also looks similar to, but is not the same as the prime symbol ( ′ ), which is used to indicate measurement in feet or arcminutes, as well as for various mathematical purposes, and the ʻokina ( ʻ ), which represents a glottal stop in Polynesian languages. Such incorrect substitutes as ´ (acute) and ` (grave) are not uncommon in unprofessional texts, where an ambiguous treatment of the apostrophe in digital typesetting (as explained below) is a major factor of this confusion.